So, in February, I saw some small bay trees in Tesco; they were meant as mother's day presents.  They looked a lot like this small bay tree from Trees Direct, even down to the sackcloth wrapping, although, as I recall, the ribbon was polka dotted.  "Shall I buy it?" I asked my neighbour, whom I had run into in Tesco that night and spoken to for the first time in three years.  "Yes, yes, do," he said, looking very abstracted.  He's had a baby in the interim.

Oh, that winter.  It felt like a thousand years.  Nonetheless, the bay happily stood in a window where it received sun for three hours or so a day and started sprouting leaves, keeping company with an over-wintering chilli bush.  I started using the odd leaf here and there; mainly for potatoes dauphinoise, but also in chicken stews and, most recently of all, in caramelised onion chutney.  Over the three months I learnt that the older leaves, not the newer ones, release more scent, and that you don't need to dry the leaves, merely warm them in your hands before using.  The bay has a cinammony, nutmeggy smell, with undertones of spice and warm rum.  It's become one of my favourite herbs, but the tree is growing faster than I can use it.

So, I am doing some research on how to dry bay leaves, thinking I can give them away for Christmas, somehow, and I come across a warning that culinary bay, laurus nobilis, can easily be confused with mountain bay, kalmia latifolia which is highly poisonous, and this is why people say bay is poisonous, but it isn't really, but do be careful to make sure you know which bay it is that you are eating, boys and girls.

I freaked out a bit at this point, because I didn't know if my bay was laurus nobilis or kalmia latifolia.  Wikipedia, as you can see, is not that helpful, the point being that the leaves from the two plants are actually incredibly similar-looking. So I sent a letter to Tesco, via their website.  They acknowledged receipt on April 24th.  I can't remember my exact wording, but as I recall, the thrust of my question was: "I bought this plant from you in February, I've been using this plant for cooking, but would like you to confirm that it is laurus nobilis and not something toxic."  Perhaps I said that I wanted to use the plant for cooking, giving the impression that I hadn't yet.  I'm not sure.

Anyway, I get no further contact from them, and in the meantime, make some onion chutney, heavy on the bay (three leaves to a pound of onions) and light on the red wine vinegar (that is, no red wine vinegar at all - I am experimenting with balsamic and cider vinegar to get an undertone of apples) and am contemplating further experiments with onion chutney, all of which feature the bay at the centre of the taste spectrum.  In fact, I go so far as to buy some Kilner jars and some apple balsamic vinegar to go with the cider, thinking that onion chutney might make nice Christmas presents, etc, etc, but it's going to be my onion chutney, with a difference (and a lot of bay). On Friday or Thursday, just after I had returned from work, via the shops, with the afore-mentioned vinegar, I get a phone call from Tesco. A woman.

"Has anyone else spoken to you about this?" asked the woman. She was very Welsh.

"How much?" asked the woman.

"Oh, you know," I said, hand waving with my voice.  "In some recipes, you know. Maybe about ten".

"We don't sell it for culinary use," she said, and repeated that several times in between giving me instructions not to use it in cooking several times.

"What is it?" I asked.  I was a little suspicious by now; I seemed to be on the end of some corporate bollocks.  "Is it laurus nobilis?"

"I don't know what it is," said the woman.  "I've just got an instruction here that it is not for consumption.  Don't eat it!"

Curiouser and curiouser.  I'm a little upset.  I mean, I'm not dead, but if the plant is poisonous enough for me to be instructed not to use it for culinary purposes, and I have, I would like to know what the risks are, what the plant is, and what are the symptoms I should be looking for.  I get none of this information.

Plus, if the plant is so poisonous that I MUST NOT EAT IT, why take (counts) NINE DAYS to get back to me to tell me I must not eat it when that is clearly what I have in mind to do.

So I do some more research and put plaintive pleas up onto the internet for someone - anyone - to tell me if my Bay Tree is trying to kill me or not.  I use these two pictures: 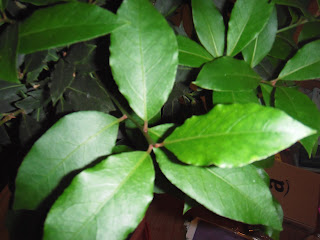 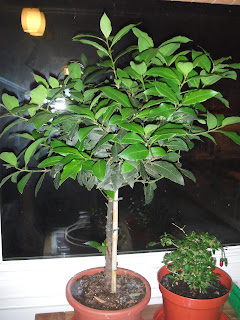 I even send a tweet, or a series of them, to James Wong.  He's an ethnobotanist.

(I've had no answer yet, but I expect he's been busy with Countryfile)

One of my friends points out that if it smells like a culinary bay and hasn't killed me, then it is probably a culinary bay.  A different friend points out that, empirically, I haven't died yet, so there's a large chance that it's not toxic.  I can see, rationally, that they both have a point, but in my mind I counter this with tales of toxic build-up e.g. Mercury and also that I don't really know what a bay tree smells like; I just know what my tree smells like (cinnamon and nutmeg and days in the sun).  So I come up with a plan.

The plan is this.  I will go to Tesco and buy some real bay leaves and smell them and compare them with the smell of the leaves from my bay tree, because I want to use a bay leaf in some fish pie for a recipe I'm working on for Jack Sprat. So, off I pop.

In Tesco, I'm out of luck.  There are no bay leaves although, apparently, there are three types of Aussie conditioner, three for the price of two, Berocca soluble vitamins, also three for the price of two, and some super-cheap Parmesan.  As I am about to leave, I notice, in the 'summer' section, a small plant looking very much like my bay tree did when I first saw it.  In fact, it is labelled as shown: 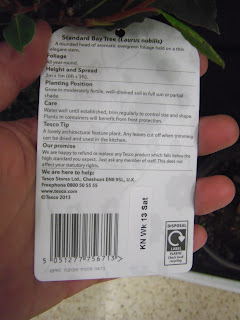 It is clearly called laurus nobilis.  And do you see that Tesco Top Tip, there? "Any leaves cut off when pruning can be dried and used in the kitchen." Ha!

I 'pruned' the plant of one leaf and slipped it in my pocket. It doesn't smell of much, but then it has been inside, bathed with the weak commercial light of high capitalism for some days; nothing would smell of much, given those conditions.

So I bring my leave back home and compare it with a leaf from my bay tree.  Here's the front of the leaves.  My bay tree is on the right. 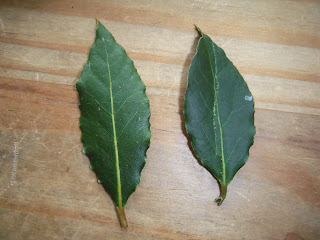 And here's the backs of the leaves. 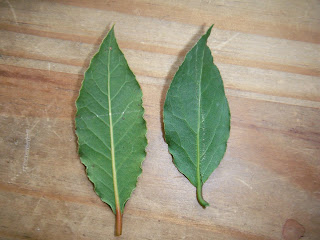 So I make the fish pie, using the purloined bay leaf, anyway.

What do you think, boys and girls?  Do I have a culinary bay or not?  Are the differences simply due to intra-species variation?  Am I in danger of poisoning myself with a residual insecticide?  Why could Tesco not simply tell me what the name of my tree is?  And would anyone like some caramelised onion chutney? It's going to be special.